As most Nova owners are aware, there are new restoration, reproduction, and performance improving parts that are coming out for our favorite ride almost daily. This week, I have selected a couple of things that I believe are way cool for our machines- LED taillights and in-dash tachometers (dash tachs).

After buying a small extra-bright flashlight recently, it dawned on me that the blue beam shining intensely was from LED bulbs. Not long after that, I came across a vendor who was making a retrofit taillight kit for ’66-’67 Novas. “How cool,” I thought, as those old bulbs certainly don’t give up much light.

As far as the installation process, there really isn’t much effort required to make the conversion. In fact, it’s almost idiot-proof (don’t quote me on that, though). We had both taillights glowing in less than 40 minutes.

This is a simple and quick install with great results. All it takes is to bolt in what appears to be a small hard drive with LED lights and wire up the leads. And boy, what a difference!

At our shop, all the ladies said they looked pretty and the guys said they were definitely cool. (Having both genders happy at the same time about the same product isn’t too common according to my watch.)  Just knowing that it will make the person driving behind you realize that you are stopping is the most important part about this swap.

I had no idea of the growing popularity of these small little lights. After a trip to Carlisle I realized that 90 percent of the big trucks out on the road had these things glowing. It seems some were a little bright at night, but they certainly helped to be a little brighter during daylight hours. All and all, they are a plus. Parts you need to complete this project: 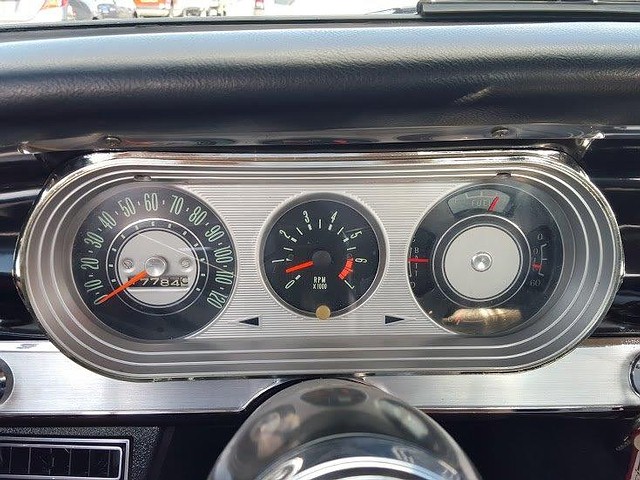 The new reproduction in-dash tach for ’63-’65 cars is an item that has been a long time coming. In the early days (when I had hair), I purchased a bullet-style plastic tach from K-mart. I sawed off the sharp rear portion of the gauge to make it flat and gutted the clock to use as a backing plate. It was crude but it functioned and looked great.

The factory original was designated the U16 Tachometer Equipment 296. U16 is the RPO (regular production option) code for the 1965 in-dash Nova tach. 296 is the production number of this option! It was the only in-dash tach ever offered on an early model Nova.

When we finally had the time to install the new Nova in-dash tach, once again we realized that the install was a no-brainer. All it took was to drop the steering column down a bit, remove the cluster, remove the three screws holding in the factory center clock (or block-off cover), and install the tach.

Wiring was also simple. The installation time was about 1-2 hours or so, longer if you do regular maintenance on the cluster or a complete restoration. And, the tach will fit in a ’62, provided you use a ’63-’65 cluster bezel.